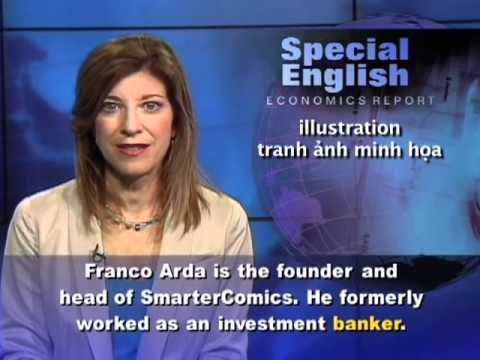 This is the VOA Special English Economics Report.

You probably have heard of comic book heroes like Superman, Batman and Spiderman. But what about Tom the motorcycle shop owner, Joe Knight and Karen Berman?

Tom, Joe and Karen all appear in a comic book called “Financial Intelligence.” But Mr. Knight and Ms. Berman are real people. In two thousand six, they wrote a book called “Financial Intelligence: A Manager’s Guide to Knowing What the Numbers Really Mean.” It was written for people who need to learn quickly about accounting. The book explains, in simple ways, often-complex methods of keeping financial information. It became a best-seller.

In June, publisher SmarterComics released a comic book that provides the same information in easy-to-understand, picture form. The new book is a combination of a textbook and a graphic novel. It tells the story of Tom, a mechanic who must quickly learn how to direct the motorcycle repair shop his father founded. Tom has no experience with finance, and is struggling with the business. Joe Knight and Karen Berman help him. Artist Dave Wachter made illustrations for the comic book.

Franco Arda is the founder and head of SmarterComics. He formerly worked as an investment banker. He started the company almost three years ago with his own money. He wanted to create educational comic books that increase understanding.

Franco Arda notes that many people grew up with comics. He says pictures combined with written text can help people learn an idea much more quickly than just text alone. This explains the expression, ‘a picture says a thousand words.’

“Financial Intelligence” will help readers quickly understand many of the major areas of accounting. The new comic book is available in paperback.

The website Entrepreneur.com named SmarterComics to its list of 100 Brilliant Companies of 2012. The company has created comic book versions of more than ten other books. These include “Think and Grow Rich” by Napoleon Hill, “The Prince” by Niccolo Machiavelli and “The Art of War” by Sun Tzu. Later this year, SmarterComics plans to release a comic book by rapper 50Cent. .

You can find out more about which cookies we are using or switch them off in settings.

This website uses cookies so that we can provide you with the best user experience possible. Cookie information is stored in your browser and performs functions such as recognising you when you return to our website and helping our team to understand which sections of the website you find most interesting and useful.

Strictly Necessary Cookie should be enabled at all times so that we can save your preferences for cookie settings.

If you disable this cookie, we will not be able to save your preferences. This means that every time you visit this website you will need to enable or disable cookies again.